How to buy Magic Mushrooms in Portland Oregon 2022 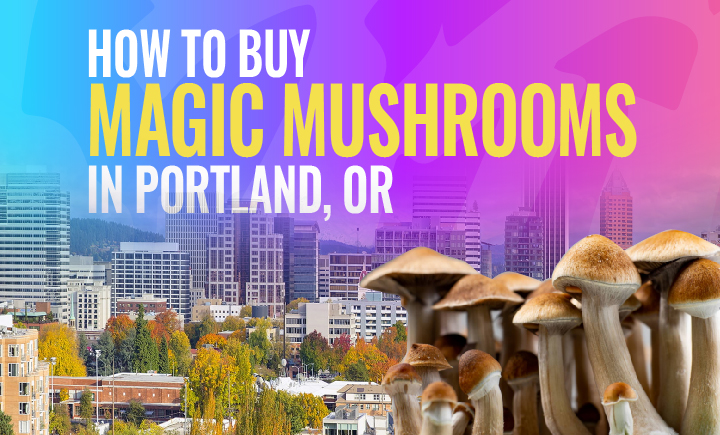 With the legality of psilocybin just around the corner for the state of Oregon, many people are asking “what exactly are magic mushrooms?” and “how can I buy them in Portland?”

What are Magic Mushrooms?

The term “magic mushroom” actually encapsulates more than 200 species of mushroom that contain a naturally occurring hallucinogenic compound called psilocybin. When the body digests psilocybin, it converts it to psilocin, which produces the psychoactive effect leading to hallucinations that are well associated with the use of these magical fungi.

While shrooms technically aren’t legal just yet, they will be soon in Oregon and its prized city of Portland.

Ballot Measure 109 passed in November of 2020, allowing the Oregon Psilocybin Services (OPS) section of the Oregon Health Authority (OHA) to license and regulate psilocybin products and services within the state, making Oregon the first state to do so. OPS will start taking applications for licenses starting January 2, 2023, and it’s likely that the legal administration of psilocybin products and services could be available by mid-2023.

Once licenses are available and psilocybin businesses are open, the ease of access and usage is not expected to be the same as the current cannabis industry in Portland. For cannabis, you can pretty much throw a stone and find a dispensary or two to walk into and out of with your preferred form of bud in hand in just a few quick minutes, ready to consume at your leisure – pursuant to local and federal laws, of course.

However, the magic mushroom scene is expected to be much different when it first hits the market. OPS is still working through its developmental period to establish the platform for this new legal industry, so there are still a number of unknowns when it comes to how you’ll be able to partake.

Here’s what we know so far.

According to a fact sheet released by OHA, psilocybin services will be available for people 21 or older without the need for a prescription or medical referral. So, there’s no need to go see a doctor to get some form of a medical card or reason first.

A minimum of two sessions are understood to be needed when you decide to consume your magical shrooms:

So, what does that mean for you? Well, you’ll basically have a licensed trip sitter to help you on your journey!

Decriminalization vs Legalization in Oregon

On the federal level, psilocybin is still listed as a Schedule I substance. However, more and more locations across the U.S. are moving to decriminalize and/or legalize the use of magic mushrooms.

There is an important difference between whether a local decides to decriminalize a substance versus legalize it. When a substance is decriminalized, it is still deemed illegal, but the possession of said product for personal use won’t be prosecuted or criminalized so long as it is less than a specified amount.

Offenses for possession of decriminalized substances are typically treated with a fine or some sort of education or treatment program, similar to a minor traffic violation. When a substance is legalized, it’s no longer prohibited, and you can’t be penalized for possession for personal use.

The state of Oregon has both decriminalized and moved to legalize the use of magic mushrooms through the passage of Ballot Measure 109 back in late 2020.

The effects of taking shrooms tends to vary depending on a multitude of factors. How large of a dose did you take in relation to your body mass? What kind of mood were you in before you began your trip? What are your personality and mental history like? What kind of environment were you in at the time of your magical journey? Any of these factors could tip the hand from you having a “good trip” or a “bad trip.”

Let’s chat about the “bad trip” first. There’s a chance you could have some negative side effects to taking shrooms. It’s good to know ahead of time what you can be up against so that you can best create the right environment and figure out your best dosage for when you take them.

Some common emotional side effects that could arise during a “bad trip” are feelings of being paranoid, anxious, nervous, scared and panicked. You could also experience some physical side effects as well, like feeling nauseous, throwing up, getting a headache, or even experiencing an increase in heart rate or blood pressure.

Not all trips are bad though. With some preparation, you can set yourself up in the right environment and with a good dose to help you feel the positive euphoria of a “good trip.” When done right, there are many benefits of taking shrooms. You’ll most likely find yourself hallucinating amongst a distorted sense of time, possibly even feeling a sense of spiritual elevation, self-discovery and ego death.

If you are a person who battles with depression, anxiety or addictions, shrooms may actually help you treat those issues. In short, when done well, they can have a positive impact on your mental health and overall well-being.

So, where can you find a licensed facility in Portland to administer your desired dose of magic mushrooms? Well, that is still to be determined, but hopefully more information will be available once the OHA starts accepting license applications at the beginning of 2023.

While we’re still months away from the new year, it’s not too soon to start learning about the different types of magic shrooms to help prepare you for your mystical journey. It’s still unclear what variations are going to be made available in Portland, but here are some of the most popular species and strains of these psychedelic treasures.

Cubes are the most common and most well-studied species of psilocybin mushrooms. Among this species, there are a variety of popular strains that range in potency and trip effect. Here are a few fan favorites:

Looking for a stout shroom with a strong kick? Then PE is the one for you. With a name derived from both its physical appearance and its rarity, this strain is arguably the most sought after magic mushroom. The shroom has a thick stem and bulbous cap, creating a phallic resemblance, hence the “penis” part of its name. The strain is hard to find or cultivate because of its slow growth, which is thought to be the reason it produces high levels of psilocybin. Not only is it a challenge to get your hands on, but it’s also well desired due to its extremely high potency, thus the “envy” portion of its name.

GT is one of the most commonly used shrooms that packs a moderate potency, making it a great choice for beginners (still mind your dosage, of course!). It’s named for the yellow or golden center of its large cap and the profound and insightful trips many users report experiencing with this particular strain.

A high potency, hybrid strain that is a cross between Golden Teacher and Albino A+, Albino Goldies is best known for creating an immense body high among users. Albino Goldies resemble both of its parents with its golden cap from the Golden Teacher and its slender stalk that bruises blue, like the Albino A+. Since this strain elicits both strong physical and mental aspects of the trip, it’s recommended for more experienced users.

A species of its own, Psilocybe azurescens was actually discovered just outside of Portland in the late-1970s near the mouth of the Columbia River. This shroom packs a mean punch, and is said to be one of the most potent of all types of psilocybin mushrooms. Due to this high potency, Flying Saucers are a favorite among microdosers since so little is needed. Like most magic mushrooms, this beauty gets its name from its cap’s resemblance to a flying saucer.

Though they are from a different genus than the Psilocybe cubensis and Flying Saucers, Panaeolus cyanescens are still psilocybin mushrooms that carry a pretty high potency. Blue Meanies are understood to be two to three times more potent than your standard cube. Similar to the Flying Saucer, these shrooms are ideal if you’re looking to microdose since a little bit goes a long way. True to form, they get their name from the blue hue they turn after they are picked and the mean puch they pack with their super high potency.

How To Dose Shrooms Correctly

Now that you have a better idea of which type of shroom you want to use, how large of a dose should you take? Well, that depends on a multitude of factors. Lucky for you, in Portland, your licensed facilitator will help you determine your proper dosage. Shrooms typically take 30-60 minutes to kick in before you start to feel the effects. Once you start your journey, you’re typically in for a four to six hour ride, depending on the strain and the dosage of course!

There’s also the choice of microdosing versus macrodosing. Microdosing entails taking a small dose that ideally leads to experiencing the physical and mental health benefits of magic mushrooms without risking a “bad trip” or full on, lengthy hallucinations.

Microdosing has been used to treat things like anxiety, depression and headaches and has been associated with improved mental health. Macrodosing involves taking a large dose that leads to the full hallucinogenic and psychedelic effects of the psilocybin mushrooms.

Macrodosing is more closely associated with ego death, having a spiritual awakening and feeling more ‘oneness’ (or connection) with the universe and nature.

Whether you’re going to microdose or macrodose, you’ll need to decide how you’re going to ingest this fun fungi. The quickest way is to just eat them, though this may not be the most enjoyable experience. You can choose to eat them straight, or mix them with food to help hide the poor taste that most people don’t enjoy. Either way, you’ll want to make sure to chew them thoroughly to help release the psilocybin into your bloodstream.

If you want to try and avoid the unfavorable taste of shrooms altogether, you can brew them down into tea. Simply break up your shrooms and place them in a bowl, pour some boiling water over them and let them steep for 15 minutes. You can even add in some honey, lemon or other spices to help improve the flavor.

So, how do you find magic mushrooms in Portland? For now, keep an eye out for announcements on licenses approved by OHA starting in 2023. We could start to see licensed psilocybin facilities opening by mid-year.